Everything you need to know about how solar thermal energy works 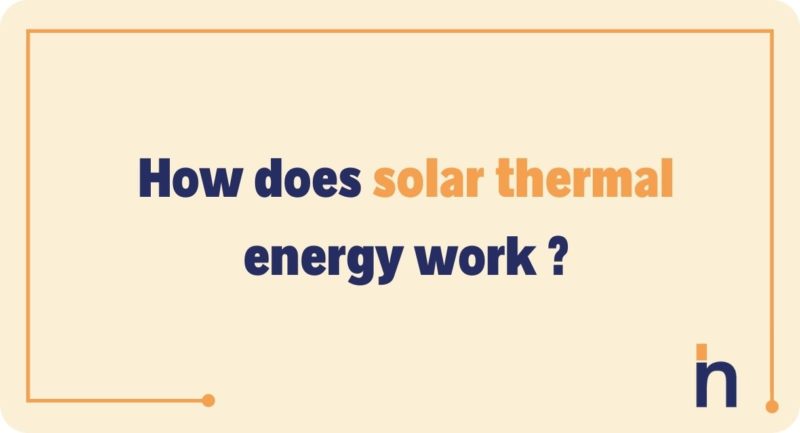 All about the greenest of energies: solar thermal energy

What is a solar thermal collector? How does it work? How does it differ from a photovoltaic solar collector? Don’t panic, here are the answers to all your questions about the most virtuous of all renewable energy production sources!

To begin with, a little terminology: sensor, panel, module, collector… do these terms describe different technologies? Not at all! they are all used interchangeably to describe the same technologies. At Newheat we prefer to use the terms “sensors” or “collectors”, which are more precise and meaningful than the generic tem “panels” or “modules”!

Even if both technologies use the sun’s energy, they are totally different!

Their objective is to collect and transform solar energy into 2 distinct forms, electricity and heat (or thermal/heating energy). They are based on different physical principles:

The solar thermal collector is the equipment used to transform solar radiation into heat.

The physical principles behind this energy production include thermal absorption and conduction. In the special case of concentrating systems, reflection also plays an important role. 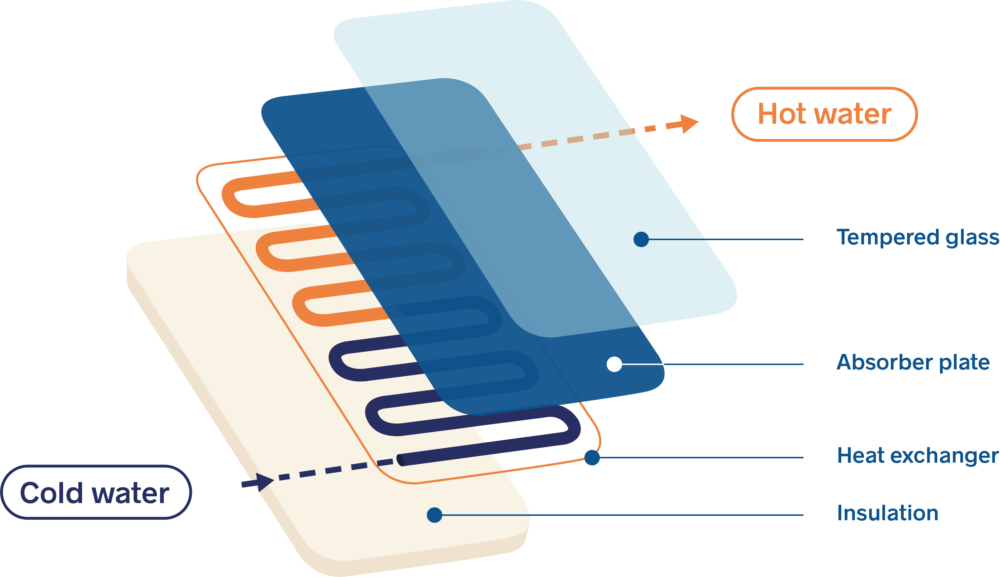 The photovoltaic solar collector uses the photoelectric effect to transform photons (particles of light emitted by the sun) into electricity.

This transformation is achieved using a semiconductor material with specific atomic characteristics. When a photon with the right energy level (i.e. at the right wavelength) comes into contact with this material, electrons are set in motion within it and create an electric current.

Historical focus: If you want to shine in Society, you should know that Edmond Becquerel, a French physicist from the 19th century, is considered to be the father of photovoltaic solar energy (he discovered the photovoltaic effect in 1839). As far as solar thermal energy is concerned, it is another French engineer, Augustin Mouchot, who can be considered the pioneer of the use of this technology on an industrial scale. In 1866, he invented the first solar engine consisting of a parabolic reflector that concentrates the sun’s rays on a glass cylinder to produce steam and thus power industrial machines.

A solar thermal collector is a sort of heat exchanger that absorbs solar radiation which it transforms into thermal energy, it is then transferred to a heat carrier liquid circulating in the collector. The liquids used can be air, water, oil or a mixture of water and propylene glycol (a biodegradable antifreeze liquid traditionally used as a food additive). Phase change materials (e.g. molten salts) can also be used for concentrated systems. There are different types of solar thermal collectors. They are generally classified into two main families, non-concentrating (stationary) collectors and concentrating collectors equipped with a solar tracker. The characteristics of a collector determine its operating temperature range and therefore the applications that can be covered.

These technologies capture the entire solar radiation and generally use water as a heat transfer fluid. Although they are limited in terms of delivery temperature, they are simple to deploy (no pressure in the circuits) and robust (feedback from massive use over several decades).

Here are some of the most widely used concentration-free technologies: 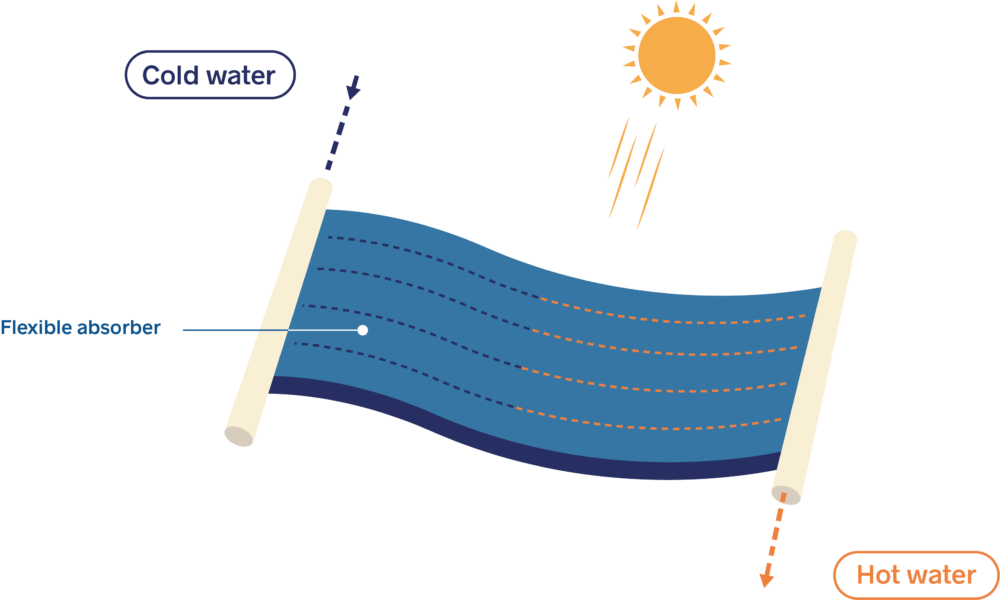 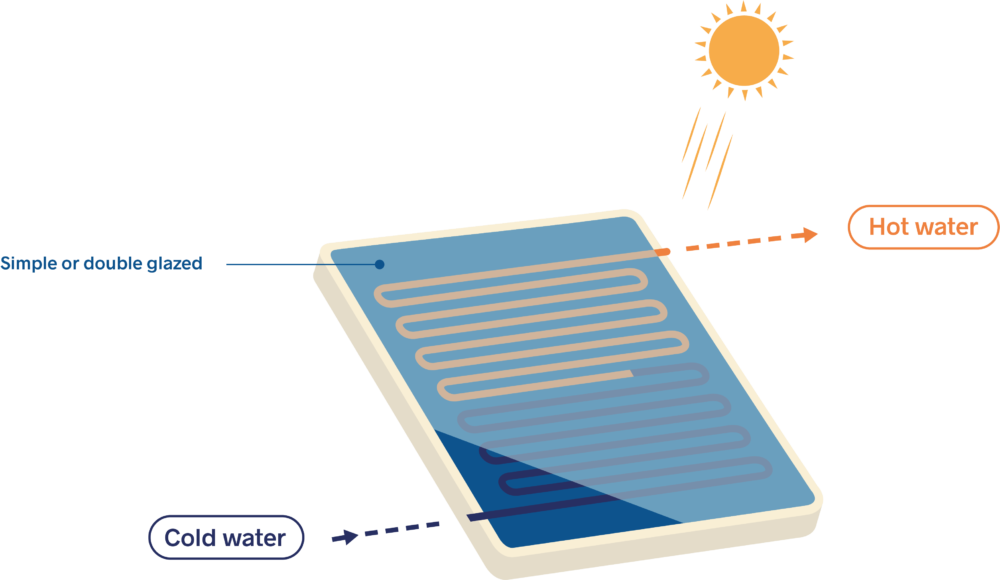 Unlike non-concentrating technologies, they capture only the direct (rather than the total) component of the sun’s radiation and use mainly pressurised water, steam or thermal oil as the heat transfer fluid.

They can achieve higher delivery temperatures, but their deployment requires the use of sun-tracking systems, and requires a design that respects the pressure constraints imposed by these temperature levels. The robustness and reliability of these installations is also lower due to this higher complexity, and requires more maintenance and cleaning of the collectors than non-concentrating technologies.

Here are the main concentrating technologies: 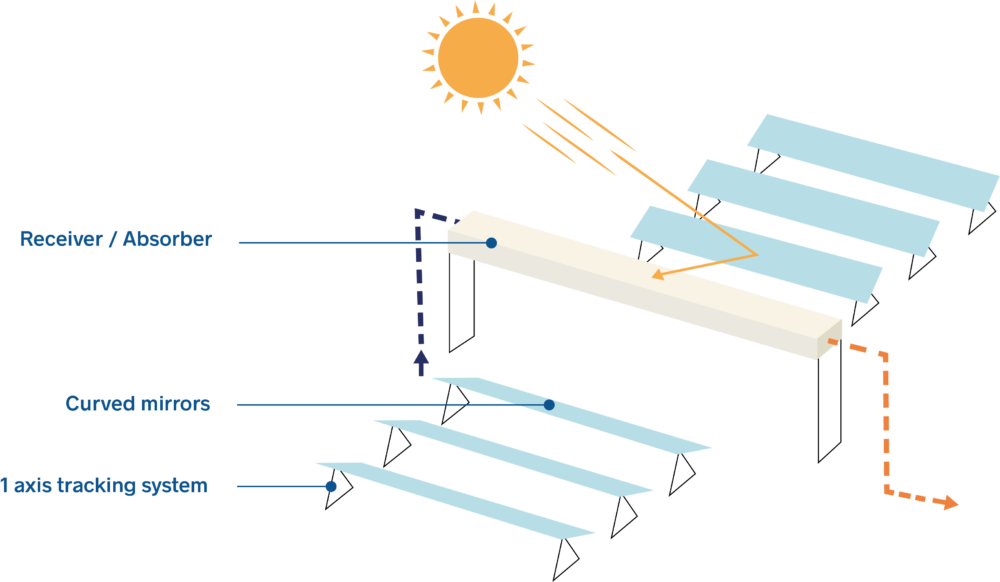 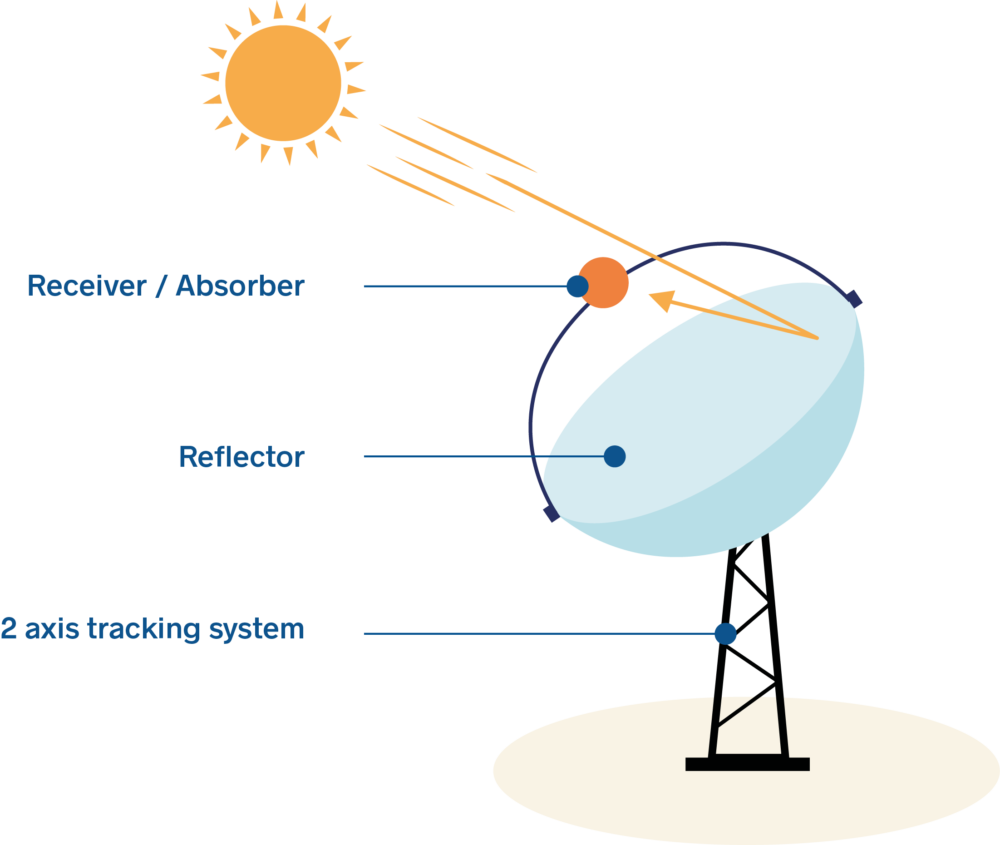 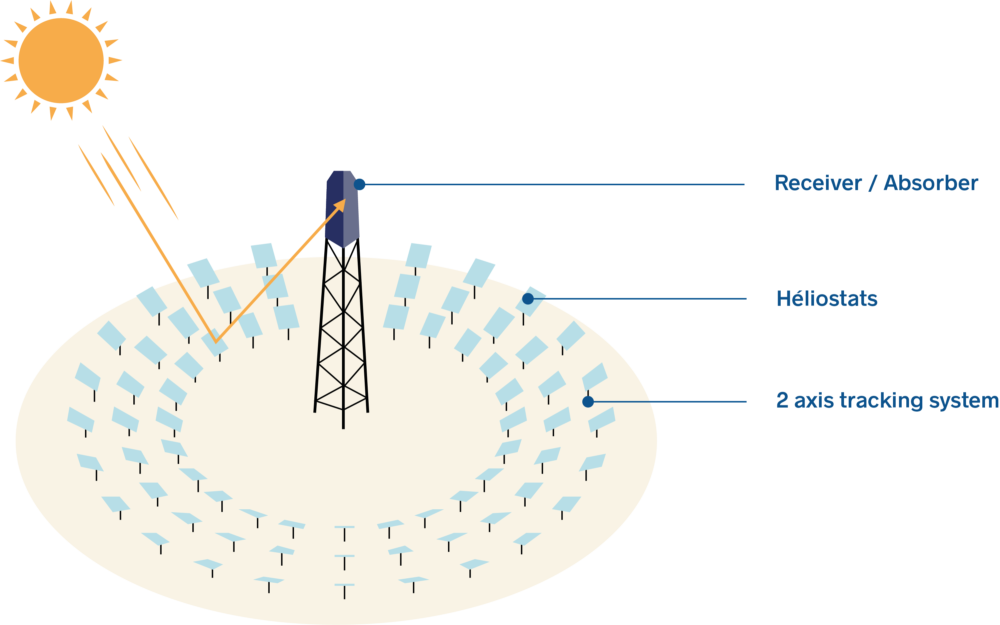 To obtain satisfactory performance, these technologies must be implemented in the form of very large infrastructures (towers of several tens of metres, Heliostat fields of several hectares or tens of hectares), leading to particularly complex systems subject to particularly high temperature and pressure constraints.

How is the market doing for these technologies?

Concentrating solar power technologies are currently mainly used for electricity generation applications using thermodynamic systems (driving a turbine with the heat produced to generate electricity). This market is faced with very strong competition from solar photovoltaic technologies, the price of which has fallen sharply in recent years. Its development prospects therefore seem limited. However, new, more massive and more competitive high-temperature thermal storage solutions are emerging, which could change this situation.

In recent years, many suppliers of concentration technologies have launched the development of products adapted to the thermal needs of industrial processes, producing at suitable temperature levels and whose installation is simpler and more flexible.

Indeed, there are photovoltaic thermal solar collectors (PV-T), or “hybrid” solar collectors, designed to produce photovoltaic electricity and to collect thermal energy from the sun at the same time. This type of collector is composed of a “classic” photovoltaic part, behind which a “thermal collector” part recovers the heat energy sent by the sun (particularly the infrared radiation usually lost in the form of dispersed heat) via a heat transfer liquid. This liquid can be air (in this case we can talk about “aerovoltaic” collectors) or water (possibly glycol).

However, their cost is inevitably slightly higher than thermal or photovoltaic technologies “alone”, and the applications allowing the simultaneous optimal use of the two energies produced are currently limited to relatively low temperature levels.

What is the efficiency of a solar thermal collector?

The efficiency of a solar thermal collector is the ratio of the energy produced in the form of heat by the collector to the total solar energy received by it. In the case of solar thermal, this efficiency can reach up to 80% for low temperature applications. These efficiencies are very high compared to photovoltaics, where the efficiency (for a “commercial” collector using mono-crystalline silicon cells) is more like 15%.

This is due to the different nature of the physical phenomena at play in these collectors, as presented earlier in this article. Indeed, only a small part of the sun’s energy (certain wavelengths of the “light spectrum”) is used by photovoltaic technology, whereas the whole of the sun’s irradiation is used by solar thermal technologies.

It is therefore always important to target the lowest possible temperatures in the range desired by the consumer in order to optimise the operation of these technologies. 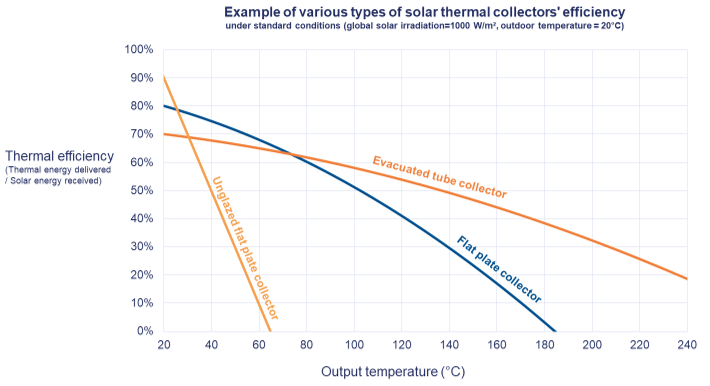 Considering all this, what is Newheat role?

At Newheat we are willing and able to work with all types of solar thermal technologies.

Indeed, we do not produce collectors and do not sign any exclusivity agreements with technology suppliers.

This total independence is crucial to us : we can freely select the most suitable technology for each project we study, based on its objective technical and economic performance and the specific needs of our customers.

This approach is particularly protective of our clients’: it avoids any conflict of interest consisting in recommending solutions that are not optimal for them but in which we would have a direct economic interest!

Once the most relevant technology has been selected, thanks to our engineering and modelling expertise, it is integrated into a complete energy system that we design and build in-house. This means that the reliability, efficiency and cost of production are optimal compared to the demands of our heat-consuming customers. But that’s another topic we’ll cover in a future article: stay tuned!

What about the plants already built by Newheat? As of March 15, 2022, all projects realized and operated by Newheat are based on flat plate collector technologies, without concentration. Indeed, considering the levels of temperature requirements for these first projects, those technologies appeared to be the most competitive. You can find the different projects here.

However, Newheat is currently investigating projects using other types of solar thermal technologies, such as concentrating, evacuated, unglazed or hybrid PV-T! You can follow the announcement of new projects via our news!

By continuing to browse this site, you agree to our use of cookies in order to optimize the quality of our service.